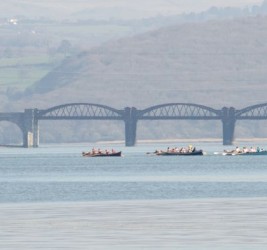 What a fantastic start to the rowing season! On Sunday 9th March, we entered 2 ladies and 2 mens crews into the Three Rivers Race hosted by Caradon Gig Club at Saltash. The weather was stunning, which made a very welcome change after the tough conditions we faced in training, and the river was calm. Spirits were high, with 59 boats entered in the ladies race and 51 in the mens and everyone looking forward to getting out on the water. The course was a tough 10 km, requiring a lot of grit and determination. The boats started under the Tamar Bridge before heading upriver into the mouth of the Tavy, then back, past Saltash and down river into the mouth of the Lynher, before turning again and finishing just short of the bridge.

The ladies raced first, entering an A team formed of Sarah Gall, Lynn Renton, Katie Turner, Heidi Brodribb, Charity Philips and Helen Atrill and coxed by Bill Stacey-Norris. They had a great race, pitted against some very strong crews in their heat, and battling for position around the course. Some excellent coxing and a strong, hard row in the final leg gave them the edge they needed and they overtook 2 boats and held off a third to cross the finish line in 30th position in a time of 60:07. The ladies B team, formed of Julie Rendle, Jane Morton, Debbie Farmer, Sandra Anstey, Claire Luxton and Helen Samson-Hill also had a very strong race, managing to take a few boats at the first turn, which put them in the middle of their heat. They held their position for the rest of the race, and had a strong finish, with some excellent coxing from Carolyn Dawe helping them home in 40th place and with a time of 61:44.

After a quick change of crews, the men took to the water. Their A team, formed of Andy Morton, Pete Keegan, Mark Turner, Stuart Heale, Jake Rendle and Rob Dawe rowed very well, with a fantastic start and some great coxing from Carolyn Dawe putting them into a strong position. They managed to hold this throughout, with a tough battle as they crossed the finish line putting them in 21st place with a time of 50:24. The men’s B team, formed of Roger High, Tim Brodribb, Dan High, Jon Overnells, Simon Luke and John Rogers and coxed by Becky Masters also had a good race. They held their position, holding off some other boats and working hard, with some determined rowing and excellent coxing helping them across the line in 58:18, 49th place.

All in all it was a fantastic day of racing, and a strong start to the season. It was lovely to be back on the water, in great conditions, and with lots of support from club members – many thanks to all involved and to Caradon Gig Club for a brilliant day. 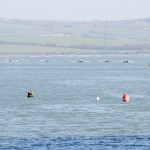 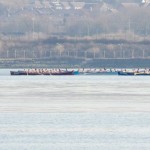 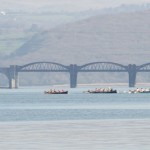 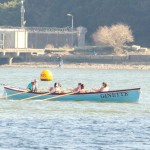 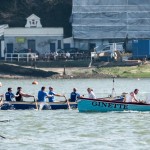 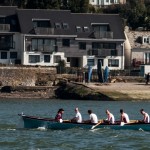 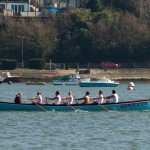 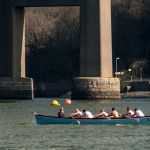