Arriving early to wind and dark clouds, and seeing the river flowing fast, we knew we were in for a bumpy ride, it’s not unusual for this particular race as along with being one of the longest races of the season it has a tendency to be unpredictable. By the time the ladies race had began at 11am however, the sun was shining through and had taken the edge off the chill in the air. We were in heat 4 so had a nice little warm up before we took to the start line and took off all the nice warm layers. It should be noted that we had unfortunately had to have a last minute crew change and lost out on bringing a B crew, we had not trained together and had a fairly sloppy start, not helped by another boat zig zagging across the water getting in our way, our wonderful cox did a great job of finding us some clear water to get into our stride, find a good rhythm and get those muscles into action. The act of “finding water” as waves rolled past (and sometimes straight over our poor #1) kept us pre-occupied enough that it didn’t seem long before the first buoy turns were out of the way and the water was in our favour for the next section of the race back to the bridge, we had by this point overtaken Cream of Cornwall with a good lead so took some breaths, relaxed into it and kept going. The usual lumpy water under the bridge tested the fact that we’d not been training as a crew but we got through it and the slog from bridge to the next set of buoys seemed to go on forever, we held our position in the pack and were slowly and steadily gaining on the boats ahead. As soon as we had turned at the buoys and began heading back upstream we felt the water harden as the current and wind pushed against us, our cox did a brilliant job of not letting the momentum drop, reminding us that “Tamar & Tavy can FINISH!” and letting us know that we were gaining on the group ahead, we gave it everything in that last stretch, we began to hear the sound of their oars and then we were past them, and as the counts of “10 hard ones” and the grunting and pain increased we past another, and then another, we had past three boats in the final stretch and then the horn sounded to say it was all over and we’d made it. 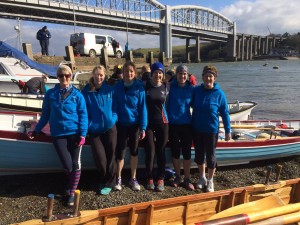