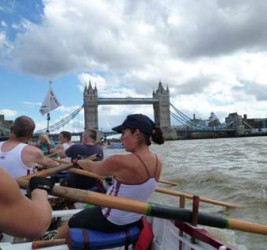 On Saturday 7th September, Tamar & Tavy Gig Club entered a mixed vets crew into The Great London River Race. 324 boats took part in the race, and the T&T crew were one of 32 Cornish pilot gigs competing. The race began at London Docklands amidst a carnival atmosphere, and the boats rowed up the Thames through central London, passing under Tower Bridge, past the Houses of Parliament, up through Putney and Richmond and ending at Ham in Surrey – a total of 21 miles of racing which made for a very competitive atmosphere. The T&T crew was formed of Carolyn Dawe and Chris Dill who shared the coxing, Lynn Renton, Johnny Rogers, Simon Howes, Martin Painter, Wendy Maclean and Sandra Anstey. They had a fantastic row, enduring only minor scuffles and some clashing of oars as they went through the bridges, and completed the course with a time of 2:45:06. This placed them 142nd out of the 324 boats competing and 12th out of the 32 pilot gigs – a brilliant result, especially as they were the last gig to start. All in all it was a great day on the water, and well worth the blisters! 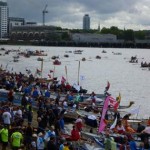 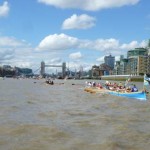 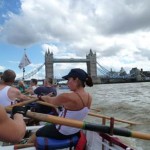 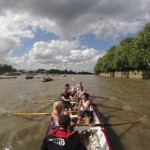