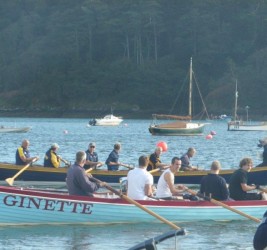 On Saturday 19th October 2013, Tamar & Tavy Gig Club travelled to Helford Passage to row in the Head of the River Race, hosted by Helford River Gig Club. The race was handicapped, with a mix of crews competing, including ladies, mens, vets, mixed and juniors, with the boats setting off in groups and the strongest crews starting last and trying to catch the boats ahead.

Tamar & Tavy Ladies started in the third group, with the crew consisting of Julie Rendle, Julie Eastaugh, Katie Turner, Sandra Anstey, Sarah Gall and Clare Luxton, coxed by Jo Cameron.  They were in a group of about 8 boats at the start, and battled their way up the river, vying for position with a number of other gigs. They rowed strongly, with lots of encouragement and great coxing carrying them to the finish line, where a final effort saw them holding their place and beating the boat that was the fastest to complete the course by the skin of their teeth! They completed the course in 42:41 minutes, coming 17th out of the 29 boats competing.

The Men’s crew, Mark Turner, Dan High, John Rogers, Rob Dawe, Pete Keegan and Jake Rendle formed a very strong crew. They too had a fantastic race, starting 6 minutes behind the ladies, and some great coxing from Carolyn Dawe resulted in them overtaking a number of boats, and crossing the line in 38:52 minutes, making them third fastest to complete the course. A brilliant result to end the season!

Both crews had a great day out, rowing on a beautiful stretch of water and enjoying the sunshine, making the most of the last race before the winter kicks in.