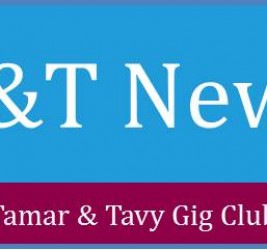 Please click the link below for a copy of the latest news from the River Tamar! 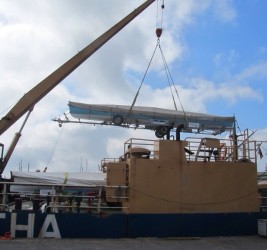 Ginette has now joined Tamar on the islands! Thank you to Lynn Renton for delivering her safely to Penzance for us. Training is winding down now (the Ladies A even had a time for a cream tea after last Monday’s row – thank you Heidi) and there is less than a week to go before we will be heading west to join the gigs. In fact, this time next week day one of racing will be well and truly underway! We’ve been enjoying some much better weather recently, with some stunning weekend and evening rows. All the crews are looking strong, and despite some last minute injuries we have 4 full crews ready for action! The ladies managed a day sea training thanks to Bill Stacey-Norris a couple of weeks ago, and the men have been putting the hours in on the river. Now all that remains is to get everyone out to the Scillies and then to row our hearts out….bring it on! 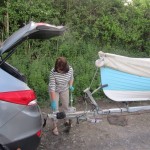 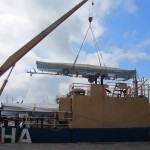 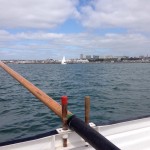 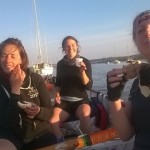 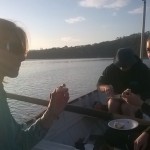 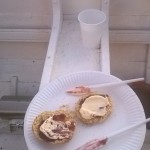 Tamar is off! The countdown is truly on… 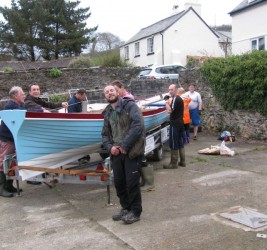 Tamar went on her merry way today, taken to Penzance by John Rogers (thank you!) and seen safely aboard the Gry Maritha for her voyage to St Mary’s. She should be there by now, no doubt eagerly awaiting our arrival in less than a month’s time! Training is going well, with both Men’s and Ladies crews working hard on the ergos and on the water. You would in fact be forgiven for wondering if the coaches want us to be alive to make it to the Scilles given what ergo sessions entail at the moment! No pain, no gain though, and no doubt we will be greatly appreciating the blood sweat and tears when we hit the water for race one. Tomorrow brings the pre-IOS meal, and a chance for both squads to get together and swap notes. The countdown is truly on…so here’s to a good hard final month of training, and this time next month we will be there! Can’t wait! 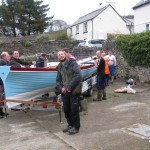 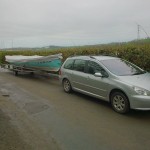 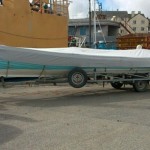 Weir Quay Community Watersports Hub Club is delighted to announce that they have successfully secured £50,000 of funding from Sport England towards their new facilities at Weir Quay. The Hub Club, formed of Weir Quay Sailing Club and Tamar and Tavy Gig Club has been planning for these facilities since 2008 when both clubs learned that they would be losing their current, leased facilities, including boat storage and the dingy park.

This fantastic news goes a long way towards securing the long-term future of both clubs, with planning permission granted and the purchase of the land almost complete, the work will begin soon on the new facilities, including a boat park and boat shed with toilets and changing rooms.

Peter Key, founding chairman of the Hub Club said “The news of the grant from Sport England is another milestone passed for everyone who has been involved over many years in finding a permanent home for our Sailing Club and Gig Club. The fact that a national body like Sport England is offering financial support speaks volumes about the merit of the scheme and we should all be offering our thanks to those involved in preparing the bid.  Do I see the Home Strait looming into view?”

The Sailing Club has been based at Weir Quay since 1966, and 2014 marks the 10th anniversary of the Gig Club, and with the promise of new facilities now very much a reality, both clubs foresee a long and bright future, providing rowing and sailing opportunities for local residents of all ages. Cllr Mike Benson of West Devon Borough Council said “I am delighted that the Hub Club has been able to secure this magnificent grant from Sport England. This will make a significant contribution towards the creation of the new watersports facilities. Hopefully this will enable people of modest means to enjoy the waters of the Tamar Valley well into the future. Weir Quay provides West Devon’s only public access to coastal waters that is available at all tides.”

Both clubs are Community Amateur Sports Clubs (not private clubs). Membership of the Sailing Club costs a little under a pound per week with weekly sailing tuition in the season, and the Gig Club provides year round rowing and coaching opportunities for less than two pounds per week. More information can be found on their websites: http://www.weirquaysailingclub.co.uk/ and http://www.tamarandtavygigclub.co.uk/

A huge thank you must go to all involved in compiling the grant application and helping to secure the future of both clubs, and for all the support we have received. It is a fantastic achievement.