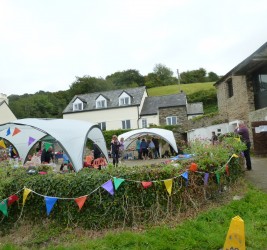 On Saturday 21st September, Tamar & Tavy Gig Club held their annual regatta at Weir Quay. It was a fantastic day of rowing, and was well supported by local clubs, with teams entering from Cotehele, Cattewater and Rame. Tamar & Tavy laid on a bbq, cake stall, tombola and raffle which kept the teams and their many supporters fed and watered throughout the day.  The event proved also to be well supported by local residents, and it was fantastic to have such a crowd to cheer the crews on, both from the shore and out on boats which added to the racing atmosphere. 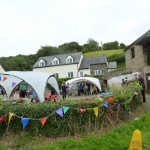 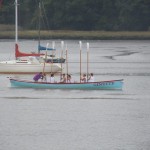 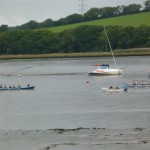 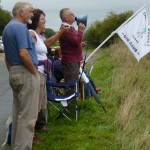 The racing began with the epic Brunel Trophy, a handicapped race where the teams rowed down to the Brunel Bridge and back. This was a hard 6 mile race, coinciding with slack water and some strong winds which made it a battle for the crews competing. Cattewater came through victorious in the end with Tamar & Tavy finishing in fourth after being overtaken by Cotehele men in the final stretch! The shorter sprint races followed this, which proved hard races for all competing, especially those who had already rowed in the Brunel race! The course went down towards the Tavy and round a buoy, which, thanks to the tide being one of the biggest of the year, made for some tricky bouy turns! Some strong rowing led to wins for Cattewater in the Mens, Tamar & Tavy in the Ladies and Rame in the Super-vets. The day ended with Barbarians races where the junior rowers were also able to join in the fun. Rowers from all the clubs entered, making for some fantastic scenes as the teams pulled together for a final row. All in all a brilliant day was had by all, and Tamar & Tavy would like to thank all the clubs that competed and all the spectators for their support and encouragement.