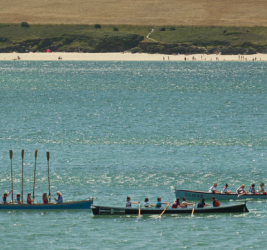 Tamar and Tavy Gig Club took 8 crews to Rock Regatta on Sunday and came away with some excellent results particularly in the junior section of the club.

The regatta was held at the beautiful Daymer Bay with crews rowing from the beach out round two buoys at the Doom Bar and back to the beach. The setting was absolutely stunning, made even more so by the beautiful sunny day. There was an off shore wind which made rowing the last leg hard going and with quite a lot of surf getting on and off the beach was quite hairy at times.

First off were the Ladies and then Mens Vets crews. Both crews had members rowing their first race giving them invaluable experience competing in sea conditions. The boats were with the main packs all the way and had really good races.

Next out were the Under 14s with Fen Eastaugh, Rosie Lloyd, Megan Haynes-Parry, Charlie Fethney, Ollie Wood and Angus Hogg. Although they had a bad start all rowed a brilliant race finishing in a fantastic 3rd position. With two fairly new rowers this really was an excellent result.

So many juniors wanted to row in this regatta that four other under 14s, Anya Anstey, Freya Novak, Caitlin Haynes-Parry and Vicky Fethney got together with 2 rowers from Cotehele Quay and formed another crew. This boat also did really well and again provided all the rowers with good experience of sea conditions. Sam Lloyd also stepped up to help a crew from another club who were short of a rower although he hadn’t planned on rowing at all.

The Under 16s race was next and T & T crew Amber Friendship, Miles Eastaugh, George Masters, Fran Kelly, Alice Kalninis and Drew Mortimore, coxed by Paula Haynes-Parry had an excellent race battling with another boat for 2nd place towards the end. They couldn’t quite hold them off so also finished in brilliant 3rd position.

The Ladies A race went off in two heats and the T & T crew were 9th overall out of 17, the ladies B crew were 13th out of 21. The Mens B crew, after having a serious battle on the buoy involving broken thole pins, were also 13th.

The biggest surprise of the day was in the last race. A boat comprising ladies and men were sent out to take part in the mixed race but after leaving the beach they discovered it was actually a novelty race which involved leaping out of the boat at the end, running up the beach with half the crew carrying the other half. For the rest of the club watching it was, needless to say, hilarious but they took it in good part with hardly any injuries!

All these results were fantastic but particular mention must be made of the clubs junior section who not only performed brilliantly but also really enjoyed themselves in the surf and on the beach all day.

The coxes did a great job as always, Bill Stacey-Norris, Tricia Stewart, Paula Haynes-Parry and Nicky Sellers. Mike Vosper once again towed the gig down the narrow lanes and the supporters also did a great job especially the youngsters leaping up and down in the surf shouting encouragement to the crews.

A great day was had by all.

Tamar and Tavy will be holding their own regatta on Saturday 27th August at Weir Quay. There will be a barbecue and evening entertainment and everyone is welcome.

The club welcome new members with sessions to suit everyone from purely social rowing to training for competition and also junior sessions on a Friday night which often involve a barbecue. All ages are welcome with the current membership ranging from 10 years old to rowers in their 70s.