Tamar & Tavy gigs to the rescue! 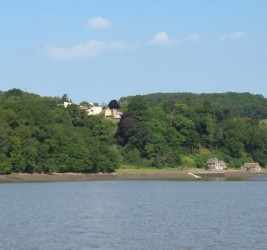 On Wednesday 23rd July, our men’s squad were involved in the rescue of four men from their boat which had become stranded in the mud on the banks of the Pentillie reach of the River Tamar.

The two crews had just started their evening session when the alarm was raised by a passing vessel who asked whether they might be able to assist in a rescue. They arrived on the scene to find the men stranded on their boat, and tried to reach them with the gigs. They were unable to get close enough to pull the boat off the mud due to the outgoing tide, but some quick thinking from the crew and coxes got the gigs close in and one crew member (Pete Keegan) ran across the mud and shepherded the men back to safety.  A police rib joined the scene but was unfortunately unable to free the stranded vessel and was in turn caught by the tide. The men were returned to the safety of a police launch at Weir Quay and one of the gigs helped to free the rib.

The crews received a thanks and commendation on their skills and competence from the police. Well done and many thanks to all involved for their good citizenship; the event was a good test of the skills and expertise of the crews and coxes, proving the worth of the club who has a presence on the river seven days a week for either social rowing or race training.

Special thanks go to Pete Keegan for his initiative and quick thinking, to George Masters who helped one of the men to recover, to Mike Blong who aided the recovery of the police rib and to Becky Masters and Chris Dill who were coxing the gigs.