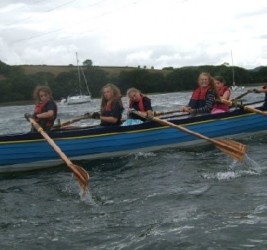 Tamar and Tavy Gig Club hosted their second regatta on Saturday.  The rain held off and despite the chilly wind everything went smoothly and all crews enjoyed themselves.   The barbecue fed everyone all afternoon and the cake stall with the most fantastic display of cakes baked by club members kept energy levels topped up.Visiting crews were from Salcombe Gig Club with their boat Bolt and local rivals Cotehele Quay with their boats Zeus and Cream of Cornwall.

The first race which opened the regatta was gruelling 7 mile slog from Weir Quay to the Brunel Bridge and back taking over an hour.  The crews were handicapped according to age so the T & T ladies in Tamar went off first and were followed and fairly quickly overtaken by the ladies in Bolt.  The Salcombe crew were, in fact, in the lead for over half the race but were then taken by the young men from Cotehele Quay in Cream of Cornwall.  The end results was Cream of Cornwall 1st, 2nd place Bolt and in 3rd place the mixed crew from Tamar and Tavy in Ginette.

The vets race was next, a shorter course but keenly fought.  The Salcombe ladies in Bolt had a good start and got an early lead.  Tamar and Tavy ladies in Ginette, after a difficult start, pulled through past the men in Cream of Cornwall and the T & T mixed crew in Tamar, trying hard to catch Bolt.  The pull down to the buoys at the Saltash side of Cargreen seemed a long row but Ginette gradually began to close on Bolt though finally losing to the Salcombe crew by a couple of boat lengths.  Finishing places were Bolt in 1st place with Ginette 2nd then Cream of Cornwall and Tamar.

The hotly contested Juniors race was next with a straight race from Cargreen back up to Weir Quay.  Tamar and Tavy entered two crews with both boats rowing cracking races to come in first and second places.  The junior section of the club has had an absolutely fantastic season this year with their commitment and enjoyment of the sport reaping rewards.

The last race of the day was the Barbarian race which despite being a more fun event is still keenly fought over.   All clubs fielded completely mixed crews with juniors, ladies and men all rowing in the same boats.  Cotehele Quay rowing in Cream of Cornwall came 1st overall and was able to celebrate some really good results during the afternoon.

At the end of the day, Tricia Stewart, club Chairman, thanked visiting crews for helping to make the regatta a success and then introduced Bob Turner, one of the clubs founder members, who kindly presented the prizes.

It was all hands on deck to get the gigs out of the water and back onto the trailers ready for the homeward journeys.  The raffle then took place and with such a vast array of gifts on offer took some time to complete.

The day was a great success enjoyed by all.