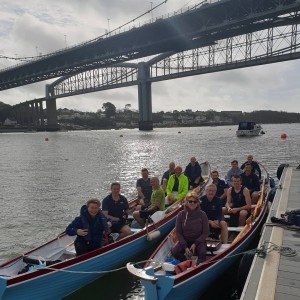 The start of the gig rowing season kicked off on March 2nd with the Three Rivers Race at Saltash. Tamar & Tavy Gig Club sent two mens and two womens crews and as is tradition the weather was less than kind to them and the 70+ gigs competing. Strong winds meant that the long straight in the middle of the race was a hard battle with some lumpy water, all good practise for us river rowers.

The ladies races were up first and huge issues with radios meant that the starts were bad for both crews. The A crew started in the wave behind were they should have been, but quickly took the lead of the pack and began to make up ground with the wave ahead, eventually managing to overtake all 12 boats and a few from the next wave as well in a time of 1:04:27, 16th place overall.

The B crew started badly as well but pushed on, overtook several boats along the way and finished in 1:21:45 71st.
The mens A and B crews started in the same heat, this was going to be interesting, the A crew were down a few usual rowers and the B crew made sure to make use of this and made them push the whole way, the B crew managed to beat them 57:46 to 58:10 45th and 46th placed respectively, incredibly close over that distance.
Fab start to the season